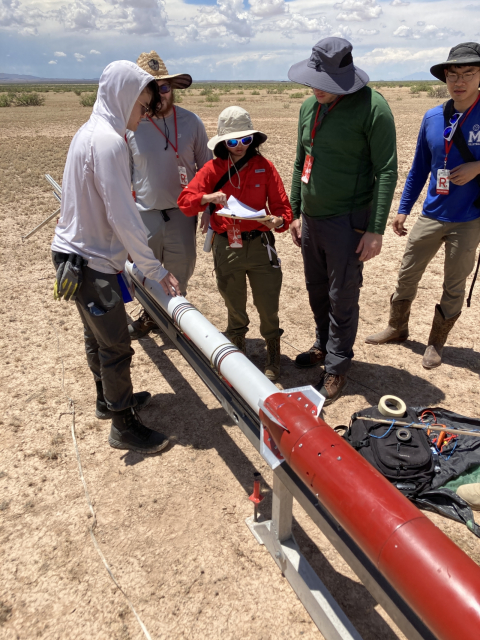 As a member of parent organization American Institute of Aeronautics and Astronautics, or AIAA, the  Rutgers Rocket Propulsion Laboratory (RPL) enables space exploration for students. The group’s rocketry team was invited to compete in the June Spaceport America Cup sponsored by Experimental Sounding Rocket Association (ERSA). With approximately 140 teams from more than 20 countries competing, this is the world’s largest intercollegiate rocketry contest.

The 13-person Rutgers RPL team that traveled to New Mexico, successfully launched a 2-stage rocket with a drone equipped with a GoPro camera that deployed at the mid-flight apogee – and  won the GoPro 360 Video Challenge for their video. GoPro has also asked the team to write a post for their blog. Watch the winning 360 deployment video here: https://www.youtube.com/watch?v=1EW-nIXgmck

“The student-run RPL team was the only team that successfully and fully launched and recovered all parts of a 2-stage rocket. We’re very sure it still flies,” reports RPL captain and president Aryanna Arcilla. “All other 2-stage teams launched with failure – and we were highly praised and congratulated by the judges for being the only successful team.”

The Rutgers team also placed 2nd highest in the competition’s design points category. “With 239 versus 240 points, we were only one point away from first place,” says Arcilla of their completely student-designed rocket.

Rising senior Arcilla views engineering as a team effort, with the RPL attracting members from diverse majors such as mechanical and aerospace engineering, electrical engineering, materials science, computer science, physics, and finance. RPL embraces a do-it-yourself approach t custom design and its close relationship with the Rutgers Makerspace lets members make many of their own parts and systems from scratch, while many other competitors depend on rocketry kits.

After starting off on good footing with ESRA organizers, RPL was praised for keeping good communications with them. Arcilla recalls, “Many ERSA volunteers are employees of places such as Sierra Space, NASA, SpaceX, NASA, Virgin Galactic, and Blue Origin. We also were able to network with them and their company booths.”

Arcilla made sure her team was up and running by 2 AM on launch day. “Although it was brutal, this allowed us to launch early, and use our time to double check our rocket among as many people on the field as we could,” she explains. “Many of the competition launches were cancelled due to weather and cloud coverage – however, we launched because we were ready to go as early as possible. “

RPL has participated in the Spaceport America Cup in every available contest since 2018, when it won the Spirit Award. Arcilla had taken part in the 2021 online Spaceport America Cup, that was a technical conference without launches due to the pandemic. Yet she says being there in person it was “unlike anything I’ve ever seen before. To see so many people, from students to professionals, coming together with a common love of rocketry was an amazing experience. Never in my life did I think I’d be sitting in a New Mexico conference room with more than 160 rockets.”

“We were so happy to have attended and we’re happy to return home with a desire to do even better next year,” Arcilla said.