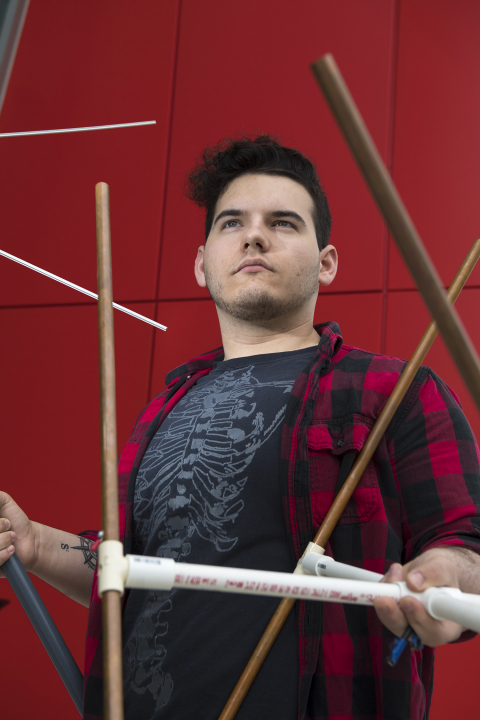 Using collaboration rather than competition, Timothy Nuber’s team wants to launch a university-built rocket into space

Whether it’s landing the first human on the moon, launching the first satellite into orbit or capturing the first images of Mars, space exploration has long been a competition led by a handful of organizations vying to become “the first.”

But a Rutgers student said this competitive atmosphere deters some of the brightest minds who could make innovation happen faster, so he decided to start his own space effort.

Timothy Nuber, a rising aerospace engineering Honors College senior at Rutgers–New Brunswick's School of Engineering, founded and serves as president of the Space Technology Association of Rutgers (STAR). The democratic community of students works together, not against each other, to stand out in the highly competitive space industry. While the group only started about a year ago, it has already grown to more than 40 members.

“Space is an expanding industry and only a few people control all of the resources, and a lot of the student activities related to space are competitions,” Nuber said. “There’s this fear and agita related to space groups and I noticed other students felt the same way, so we needed to ban together to promote cooperation instead of throwing ourselves at this hard-to-access industry on our own.”

Nuber was a technical lead on the avionics system with Operation Space, a student-led project using expertise from universities around the country to build and launch a rocket that can break the Karman Line, which is the boundary between Earth’s atmosphere and outer space at 330,000 feet. Although a team from the University of Southern California became the first group of students to build a rocket that broke the barrier, Nuber will see if the rocket he helped build can make it as well.

Together with members from STAR, Nuber helped construct the avionics bay, which he said is the “brains of the rocket, that tells it where it should go and keeps it on the right trajectory.”

His work with Operation Space also inspired him to gather students from around Rutgers and other universities to build their own rocket, and to help Rutgers lead the way to become one of the few universities to launch a rocket that reaches space.

“We can’t do it alone and even if Rutgers leads the way, it’s still OK to ask for help from students in other universities because the more we share information, the less likely we are to recreate the same mistakes,” he said. “Our goal is to share every piece of research and synergize with other groups because these connections are what will take us further not just at Rutgers but in our careers.”

Nuber said a STAR member helped him land a position at IBM building “smart” robots called TJBots. STAR is composed of groups of sub teams, similar to the structure of NASA. There are currently five project teams working on everything from building cube satellites to weather balloons and constructing a 3D printer for outer space.

“The purpose of a 3D printer in space is that if a part breaks, rather than wait to receive the proper parts or tools needed from earth to fly up, astronauts can build, repair and create parts themselves using the 3D printer right there,” Nuber said. “Materials also bond differently in zero gravity, so they might be able to create parts that physically can’t be created on Earth.”

Nuber said that after graduating, he would prefer to work for a smaller, private company rather than more well-known organizations like NASA or the Russian space agency Roscosmos. He said smaller companies could better foster his values of collaboration and sharing of information.

“My goal is to build bridges rather than wall ourselves off,” he said, adding that STAR is planning to launch a research library by mid-summer to collect, share, and publish space data with other colleges, including data from their summer rocket project. “Wherever I end up, I want to continue building connections.”

The Operation Space rocket is set to launch from Spaceport America in New Mexico between May 30 and June 1, 2019, depending on weather conditions.