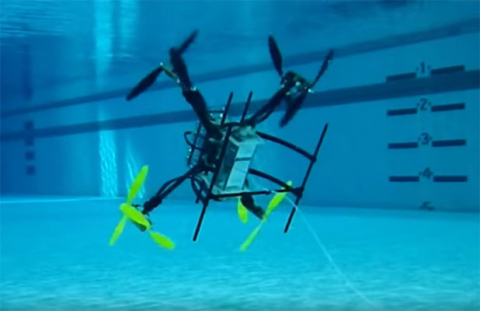 The Rutgers-developed aerial aquatic drone—the Naviator—continues to gain traction across the country as a leading drone innovation.

The Navy demonstrated its ongoing support for the Naviator by showcasing the hybrid unmanned vehicle at the Office of Naval Research’s 2017 Naval Future Force Science and Technology Expo July 20-21 in Washington, D.C.

“It was probably the biggest success we have to date,” said F. Javier Diez, the mechanical and aerospace associate professor leading the drone’s development. “There was a continuous influx of government officials. We were answering questions all day.”

The convention followed historic aerial and underwater demonstrations in June, as the Naviator successfully inspected the Delaware Memorial Bridge Twin Spans and a 100-passenger vessel at the Cape May Ferry Terminal.

“The Naviator’s ability to seamlessly and rapidly transition from flying in the air to maneuvering underwater provides tremendous opportunities for a number of industries and naval operations,” said Diez. “As these recent tests demonstrated, what previously might require a helicopter, boat, and underwater equipment, the Naviator was able to complete as a single deployment with fewer complications and in less time.”

The drone not only reduces the amount of steps required for a mission, it also can operate in bad weather—when an inspection is sometimes needed the most, Diez said. Rutgers collaborated with the Delaware River Bay Authority to conduct the demonstrations.

“Our infrastructure assets are subject to rigorous inspection programs on an annual basis, and drones have the potential to make these inspections significantly safer and more cost efficient,” said Thomas J.  Cook, DRBA executive director. “The ability to have a single autonomous vehicle inspect piers or vessels both above and below the water line is no longer science fiction.”

The inspections showcased just a few of the drone’s far-reaching applications, which range from bridge inspections to ocean mapping, search-and-rescue operations, and naval warfare.

Diez and his team of student engineers released the initial prototype of the drone in 2013. However, he said the turning point came in Dec. 2015 when a video of the Naviator went viral on Facebook, reaching over 10 million views.

“All of a sudden, we realized we had a real hit,” Diez said. “We didn’t realize how much interest there was until we got the video out.”

In 2015, the project also received a $618,000 grant from the Office of Naval Research. With the Navy’s continued support, Diez and his team are working on advancing the technology. They said their next step is to make the Naviator autonomous.

“My vision is autonomy: pre-program the mission and reduce the amount of work for the pilot,” Diez said.