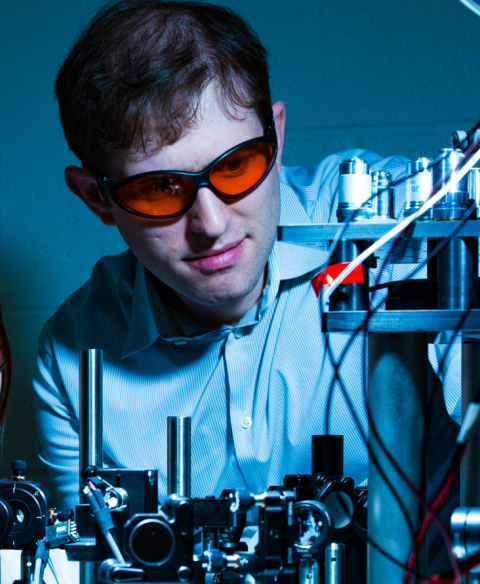 “The ONR’s Young Investigator Program is really important — and I’m really gratified to be selected as one of the few to be honored in this way,” says Singer, who will be conducting research for his project in his Hybrid Micro/Nanomanufacturing Laboratory.

Carbon fiber composites, which are polymer materials reinforced with rigid carbon fibers, have received widespread attention over the past few decades as a potential replacement for aluminum, according to Singer.

“People are interested in them because they have the properties of aluminum but they are thicker, stronger and more lightweight than aluminum,” he says. “They can be shaped in many ways, which is why there are a lot of active aerospace and automotive applications for them – as well applications for sports equipment such as helmets, tennis racquets, and surfboards.”

At present, the downside of manufacturing with carbon fibers is the cost, especially when compared with plentiful and inexpensive aluminum. In time, if adopted for large-scale manufacturing, Singer expects carbon fibers will become more cost-effective.

Supported by the ONR’s Aerospace Structures and Materials program and unfunded collaborations with SubUAS, a Rutgers University start-up that makes drones for air-sea operations, and the Energy Storage Research Group, a Rutgers research center, Singer’s project will help the US Navy develop a next generation unmanned aerial vehicles (UMAVs), or drones, that are smaller, more lightweight, and more capable of surviving extreme environments.

Work has already begun that is building on his lab’s previously-developed composite glue/resin, for which he holds a patent application with the Rutgers University Office of Research and Innovation.

“Right now, this is just carbon fiber and polymer,” Singer explains. “We’re trying to replace the polymer with a function. Depending on the ingredients we pick, we can change its function, whether we want to prevent icing, incorporate a structural battery, or shield against electromagnetic interference.”

For example, for a carbon fiber composite that is able to resist icing, a really slippery fluid would be mixed into the resin or glue, while an electrolyte and lithium-containing nanoparticles might be a more appropriate choice for energy applications. And because the resulting carbon fiber composites are stronger and lighter than aluminum, there is a very real potential for eventual adoption by automotive and aerospace industries, where weight is an important consideration. “The lighter your object,” as Singer explains, “the further you can move it with the same energy cost.”

According to Singer, the automotive industry has a keen interest in developing a lightweight structural battery able to store energy that could be integrated into the structure, or body, of an electric car. “We’re not alone in trying to address this problem, but if anyone finds the answer, it could be huge for the automotive industry,” predicts Singer.