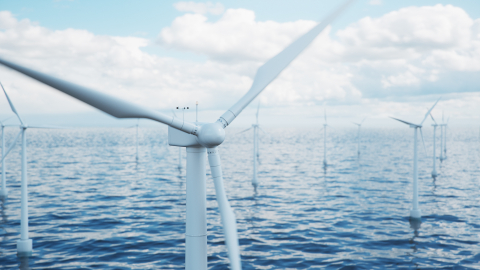 The following article was part of a Star-Ledger and NJ.com op-ed series on engineering fields that will change the world by Rutgers School of Engineering faculty.

Today, a global reliance on fossil fuels continues to accelerate the effects of climate change. In the United States alone, 63 percent of its energy comes from fossil fuels. As the world’s climate crisis mounts, the need to develop clean, carbon-free energy solutions is more urgent than ever. Worldwide, wind farms are increasingly seen as a promising means of generating clean electricity.

According to World Wind Energy Association figures, the energy produced by wind turbines worldwide reached nearly 600 gigawatts in 2018, while the World Economic Forum reports that wind farms are currently powering more than 14 percent of the European Union, with Denmark, Ireland, and Portugal leading the way. By 2019, China, which consumes more energy than any other country, had installed more land and offshore wind turbines and generated more wind energy than any other nation.

There is cause for cautious optimism here in the United States. Currently, nearly 20 percent of U.S. electricity is produced by renewable sources. Wind power, according to the American Wind Energy Association, has tripled since 2010, with nearly 57,000 mostly land-based wind turbines generating just over six percent of the nation’s electricity and more than 105,000 jobs.

Yet offshore wind turbines offer an increasingly viable–and economical–clean energy solution that could eventually out produce more conventional land wind turbines. While only a handful of offshore wind turbines have been established in this country, the U.S. Department of Energy (DOE) predicts that offshore wind in the United States has the potential to generate annual capacity of more than 2,000 gigawatts, which is nearly twice the nation’s current electricity use.

Rutgers University, along with the University of Michigan and Brigham Young University, is a primary member of a multidisciplinary team that includes the National Renewable Energy Laboratory (NREL), the Norwegian University of Science and Technology, and the Technical University of Denmark, which has received funding for one of 13 new ATLANTIS projects. ATLANTIS teams will collaborate on making a significant future societal impact by devising a fully integrated floating offshore wind turbine system.

While they tend to be more efficient, offshore wind turbines currently cost significantly more than onshore ones to construct, operate and maintain. Together, the ATLANTIS projects aim to design a floating offshore wind turbine that produces more electricity while reducing the quantity of materials used in its construction, as well as the cost of manufacturing, maintenance and operation.

The multi-disciplinary team is tasked with developing a software for designing efficient, cost-effective floating offshore wind turbines using control co-design approach, which refers to the design optimization of a system simultaneously with the system’s controller. The conventional approach has been first to design a system that is independent of its controller, which is then developed and optimized for the designed system.

Without the accurate and complete modeling of a wind turbine with all of its interacting components, such as wind, water, soil, structural, controller, electrical and economic dynamics, it is not possible to design the best turbine for a given site, nor can we decisively compare the efficiency metrics or costs of different designs for that site.

Using current computational capabilities, as well as multiple new approaches, the team will be able to design and optimize the system and the controller simultaneously rather than sequentially. The result is that a wind turbine designed using control co-design methodology will produce more–and cheaper– electricity.

Others will be able to use this software to design the next generation of wind turbines for coastal sites that will be able to produce economical offshore wind power that will ultimately reduce the cost of electricity to the consumer.

New Jersey, with its miles of coastal locations, is an ideal location for fixed and floating offshore wind turbines. The success of a project such as ATLANTIS will, in time, bolster the New Jersey economy by creating new jobs in the energy sector.

Onur Bilgen is an assistant professor in the Department of Mechanical and Aerospace Engineering at Rutgers University School of Engineering.